We were thrilled to work with Bridgwater & Taunton College to build a landing page to celebrate their successful merger and signpost the two campus websites. 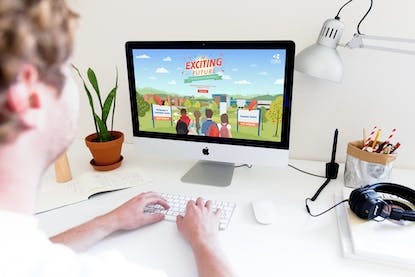 Bridgwater & Taunton College is a further education college based in Somerset, born from the merger of Bridgwater College and Somerset College in 2016.

The team at Bridgwater & Taunton College reached out to us asking for help to build an engaging landing page to direct students to either of the campuses.

Our ambition was to create a page which went beyond the organisations’ existing brand guidelines and would be something refreshing and engaging for younger people who are looking to join the college.

The team at Bridgwater & Taunton College were keen to celebrate the recent merger, showing students that an exciting future was waiting for them. The landing page had to capture the imaginations of students who were looking to enrol in new courses and direct them to the appropriate campus website.

We kicked the project off with an exploration phase by sketching a range of ideas. It was clear an illustrated approach would work well, and the idea of having the two campuses sitting within their environment became the one the team choose to proceed with.

With our illustrated approach, we quickly decided that introducing animation to the scene would bring it to life, adding character and making the landing page more than just a static picture.

The initial loading of the scene shows the various layers coming together, complemented by the addition of movement on subtle elements including the train and clouds.

We were really happy to have collaborated with Bridgwater & Taunton College on this project, delivering a successful and central product during the exciting merger.

How can we help you on your next project?